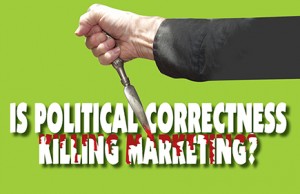 Several years ago, I saw a billboard for a furniture store with the slogan that read, “For the discriminating buyer”. You cannot say that today. Any reference to discrimination has been eliminated from all advertising vocabulary. Marketers must be ultra-sensitive, so as not to offend anyone in today’s Politically Correct climate. The worst offense any person or business can make is to be labeled a “racist”. Marketers have gone overboard to include Afro-Americans in their advertisements. Just about every TV commercial with three or more people includes at least one minority. Current trends are to feature interracial couples. While there are many black only ads that seems to be OK, but most marketers include some minorities in their advertising, including an occasional Asian, just to be PC.

Everyone must be aware there is a dilemma on proper terminology. At one time “Colored People” was an acceptable term, as in the NAACP. Then “Negro” was OK, as in United Negro College Fund which gave way to “Black” as in Black Entertainment Network”, and was then replaced with “Afro-American”. So, to be Politically Correct proper terminology must be used so as not to offend.

Political Correctness has made its presence in product marketing. In 1893 Aunt Jemima Pancake Mix was introduced and has been successful sold over the years, and even the package design had been updated. But in June 2015, an associate professor in the Africana Studies and Research Center at Cornell University called for the removal of the product, as it harkened back to the days of slavery. Along the same line, Uncle Ben’s Converted Rice is being criticized because Uncle Ben is black. Even though it was first marketed in 1943, someone claimed it represents slavery. So, the marketing of two successful products were killed by PC.

It only takes a few people, in some cases one, to be offended and impact a multi-million-dollar market. Recently a descendent, claiming to be of Native American heritage, became insulted by athletic team names like the Redskins. Because of the controversy, the Washington Redskins merchandise has dropped 35%, as some concerned fans did not want to be called racist for wearing a Redskins T-Shirt. Yielding to Political Correctness, many high schools have abandoned Native American names. The impact on the market is huge.

Gender sensitivity is on the rise. I can remember the term “man of the house” in advertising, referring to the head of the household. That phrase is no longer in Vogue. Feminists started the movement attempting to castrate masculine marketing, and now the LGBTQ movement has joined in. With 96.6% of the population, heterosexuals are pressured to yield to the 1.6%, because someone gets offended easily. In advertising, the Creative Directors and Copywriters need to be mindful in employing neutral sex references in text.

Not just the creative aspects of marketing have been killed by Political Correctness, media has been the fatality of PC as well. Social Media site have been known to “Block” or remove notices they deem “objectionable or offensive” this censorship is based subjective Political views. So, let’s say a Conservative group wants to post on Social Media, their ad will be rejected… death of free speech.

Another causality in the marketing wars are conservative talk show hosts, commentators and even sitcom actors that espouse a view, or make a statement that can be interpreted and racist, sexist, homophobic, xenophobic. Albeit a small minority, the PC crowd bombards the sponsors with threats, boycotts and even violence,  unless they withdraw their support of the program. Several popular shows, with huge audiences, have been the victims of these attacks. Advertisers lose that market share.

For every action there is an opposite and equal reaction. Walmart released a TV commercial, “Love is in the aisle: A dating show at Walmart featuring, two homosexual men on a “blind date” as they meet at the store and shop together. Through this process they discover whether or not they are compatible. While this may be Politically Correct is some circles, it is not going to attract more Christians, conservatives or traditional families to shop at Walmart.  So, marketers must weigh the odds, on what slant they will employ in their marketing. If your marketing strategy attempts to be 100% politically correct you will still run the risk of offending someone. We live in a hypersensitive world where a misinterpreted phrase or graphic can have devastating effects on a marketer’s image and bottom line. Walking the line of Political Correctness requires a marketing professional to create and produce the right message and a PR agency to mitigate any damage.