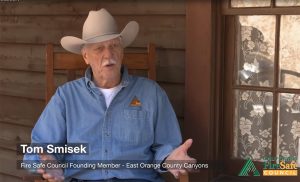 A public service announcement or “PSA” is defined as an announcement made for the good of the public. It is a message in the public interest disseminated by the media without charge to raise public awareness. It can take the form of a print or digital ad or a video commercial. A PSA is not supposed to sell a product or service although it can be utilized in promotion. Sponsors of PSA’s are organizations, groups, and public utilities

With recent concerns of wildfires, many caused by downed power lines, power companies in California and other parts of the country have been making efforts to inform and educate residents of wildfire preparedness. Southern California Edison has made exhaustive efforts to upgrade poles, powerlines and equipment in addition to extending outreach in Public Relations. One of those endeavors was to produce a PSA, YouTube video interview to illustrate how a community can prepare and respond to the threats of a wildfire. For this project SCE interviewed Tom Smisek, founding Director and VP of Fire Safe Council East Orange County Canyons, one of the most successful Fire Safe Councils in Southern California. Listen to the 3:17 minute commentary on how the educational collateral that Tom produced has helped his community.